On Saturday 28 November, come see me participating to George Town Literary Festival 2015. I will be speaking on a panel on writing about performing arts. The appointment is at 10am, the Black Kettle, Beach Street.

Quite obviously, I will be sharing stories from my experiences among Malaysian extreme music subcultures, and how they led me to write Banana Punk Rawk Trails.

I will be involved together with Robin Ruizendaal, expert on Southeast Asian puppetry, Tan Sooi Beng, Malaysia’s prominent ethnomusicologist, and Paul Augustin, musician and curator of the Penang Island Jazz Festival. Moderator duties will be performed by the inimitable Latif Kamaluddin, poet and former professor at Universiti Sains Malaysia. 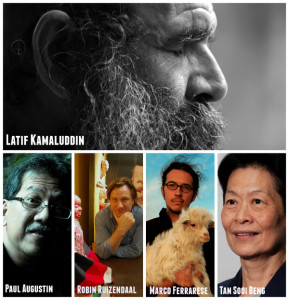 Here is a panel’s synopsis:

The performing arts have had a long, varied and intimate relationship with the written word. Lyrics, scripts, incantations, storyboards and much more infuse the world of performance, which, in turn, produces after-texts that reflect upon performances – reshaping, representing and reimagining them. This panel brings together four writers who are also performers in order to explore the intersections of performance and writing. They reflect on the worlds of music, puppetry, dance and theatre – both traditional and contemporary – and explore how words/texts evoke, interpret and embody the act.

Don’t miss out! Tables will be turned over, chairs thrown at the audience, and guitars smashed on hipster heads!!